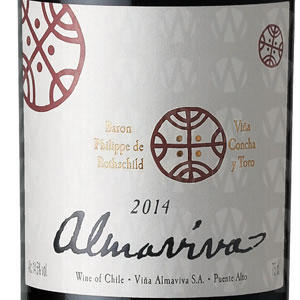 The 2014 harvest conditions in Maipo Valley were marked by a drier than average winter, with a cumulative 230 mm of rainfall from May to September 2013. The severe frosts that touched the whole Central Valley of Chile during the second half of September did not affect our estate vines in Puente Alto, as budbreak had not yet occurred. However, it did delay the budding of Cabernet Sauvignon and at the end of November, growth was still very limited. Flowering was rather heterogeneous, ending in a significant level of coulure on the late varieties.

Summer was warm and dry, with December and January experiencing higher temperatures and veraison occurring earlier than usual.

The yields on Cabernet Sauvignon and Carmenere were naturally low, while cluster thinning was applied to the Cabernet Franc, Petit Verdot and Merlot varietals.

Ultimately, harvest started earlier than average, yet under optimal conditions with the first Merlot harvested on April 1st, and the last Carmenère on May 16th. This exceptional vintage was truly balanced with expressive fruit, complexity, structure and concentration.

The nose reveals a generous, layered and powerful bouquet of blueberry, blackberry and blackcurrant, associated with hints of cedar and spices, fine notes of vanilla, walnut, licorice and dark chocolate.

Dense and full-bodied, this wine fills the mouth with round, ripe and refined tannins, leaving an overall impression of balance, finesse and persistence. Produced from a superb vintage, this wine strikes a wonderful combination of elegance and power.